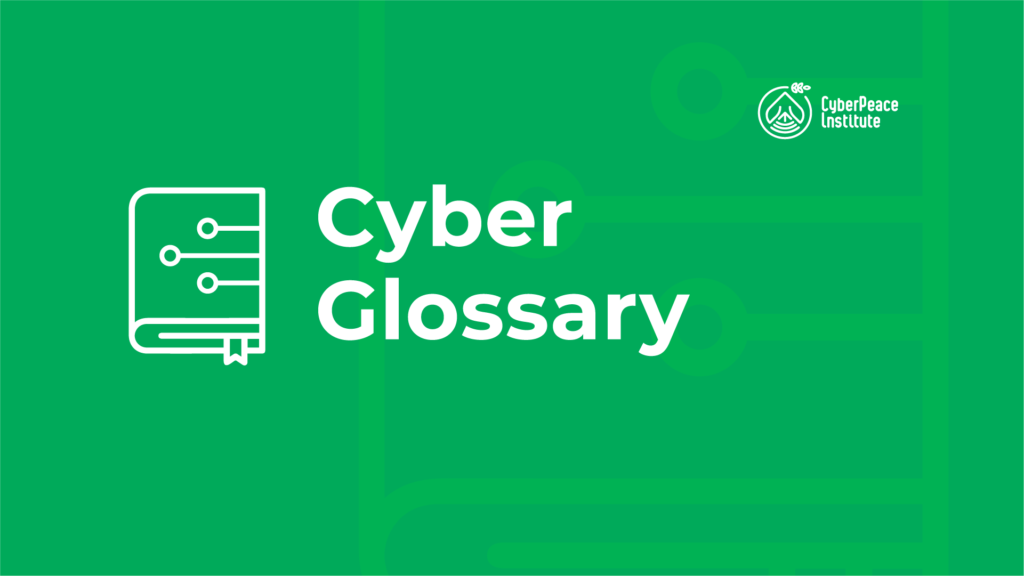 Do you know your darknet from your double extortion? The jargon around cybersecurity can be confusing – but understanding it can help us live more safely. Here are 12 essential cybersecurity terms.

Malware, ransomware, data breaches and other cyberattacks can be confusing if you don’t live your life in cyberspace. And what is cyberspace anyway? The terminology can be a challenge but the fact is that we all live part of our lives in cyberspace, whether we know it or not. And we rely increasingly on digital technology at work, at home and when we are on the move.

That means we need to know at least a little about the risks of digital technology, how we can better protect ourselves, and what we can reasonably expect governments, industry and society to do to help. Where do we start? By making sure we understand some of the terminology.

For example, most people don’t realize that the internet and the web are different things. But the difference is important when understanding cybersecurity and how we can minimize our risk. And it’s not as complicated as you might think, either. Here are 10 essential terms that you should understand.

Cyberattack: An attack conducted by a threat actor using a computer network or system with the intention to disrupt, disable, destroy, control, manipulate, or surveil a computing environment/infrastructure and/or data.

Cyber operations: A commonly used term to describe actions by a nation state or state sponsored or affiliated group to penetrate a target’s computer or networks through the use of offensive cyber capabilities such as hacking, malware or other methods with the intention to damage, deny, disrupt, degrade, destroy, surveil, or manipulate targets to achieve political, military and/or strategic goals. Cyber operations are a means or method of warfare when used in a situation of armed conflict.

Cyberpeace: Peace in cyberspace. Cyberpeace exists when human security, dignity and equity are ensured in digital ecosystems. People and their rights are at the centre of this story, not technology.

Cybersecurity: The application of technologies, processes and controls to protect computer systems, networks and data from unauthorised disclosure, theft or damage. The goal is also to reduce the risk of cyberattacks.

Cyberspace: Digital systems and the online world make up cyberspace, which covers everything accessible through computer networks and the internet. This includes everything from corporate networks and social media platforms, to bank accounts and cloud services.

Defacement: The modification of the appearance and content of a target’s internal or external system (e.g. websites).

Darknet and deep web: A darknet is an overlay network within the Internet that can only be accessed with specific software, configurations, or authorization (e.g. TOR, Freenet, I2P or ZeroNet) intended to defend digital rights by providing security, anonymity, or censorship resistance. Though it is used for legitimate reasons, it has been heavily used by criminals and the term Darknet nowadays is generally associated with websites (also called onion sites) that are specifically used for criminal purposes.

The deep web is the part of the regular Internet not indexed by search engines, and therefore not straightforward to access. This usually requires the user to authenticate to a service giving him/her additional access to information.

Data breach: The exposure of confidential, sensitive or protected information to an unauthorised person. This could be accidental, such as a USB drive left on a train or an email attachment sent to the wrong person, but it can also be deliberate, as when malicious actors  access a network and exfiltrate (target, copy and transfer) data.

Distributed Denial-of-Service (DDoS): DDoS is an attack technique to flood a network, service or server with excessive traffic to cause it to cease functioning normally. It is said to be distributed when the source of the attack is composed of a multitude of devices or systems.

Double extortion: A type of ransomware activity where the victim’s data is stolen and encrypted. Even if the victim pays the ransom, or recovers from the attack some other way, the attacker can threaten to make the stolen data public unless they receive further payment.

Malware: Malicious software. These are pieces of code designed to damage, destroy or subvert computer systems. It includes viruses that can replicate and stop systems working; ransomware, which blocks systems until a ransom is paid; and spyware, which is hidden on the target system and spies on the device users.

Malspam: Malware that is delivered as a malicious attachment in spam email. It often, but not always, requires the recipient to open the file before it can do damage.

Ransomware: A type of malware that is designed to extort money from victims by encrypting or blocking access to their data, files or computer systems until they pay a ransom.

(Data) Wiper: Specific type of malware aiming at the corruption or destruction of data and some are targeting, in addition, the MBR (Master Boot Record) to render the disk from booting properly. A wiper does not necessarily erase or destroy all data, and sometimes the data can also be recovered.

Wiping: Process consisting in erasing all data stored on a digital media in such a way that no recovery is possible. Every time a sensitive digital media is decommissioned, wiping should take place.