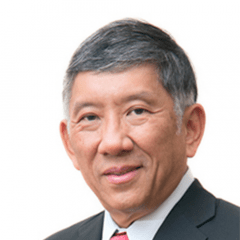 Khoo Boon Hui was the Commissioner of the Singapore Police Force from 1997 to 2010 and also served as President of INTERPOL from 2008 to 2012.

After his stint in the Police, Mr Khoo was appointed Senior Deputy Secretary of the Ministry of Home Affairs from 2010 to 2014. Upon his retirement from government, Mr. Khoo was appointed the Senior Advisor and subsequently Senior Fellow of the Ministry of Home Affairs on contracts which ended in 2016. He remains a Senior Fellow of the Civil Service College and the Home Team Academy.

He is an Advisor to INTERPOL, and holds advisory and board positions in Banking, Healthcare, Security, Cybersecurity, Defence, Casino Regulation, and Philanthropy. He co-chaired the first three US-Singapore Law Enforcement Homeland Security and Safety Co-operation Dialogue with his US counterparts and the first two ASEAN Senior Officials’ Roundtable on Cybercrime as well as the Singapore Safe City testbed initiative. He is the current Chairman of the Milipol Asia Pacific Conference 2017.