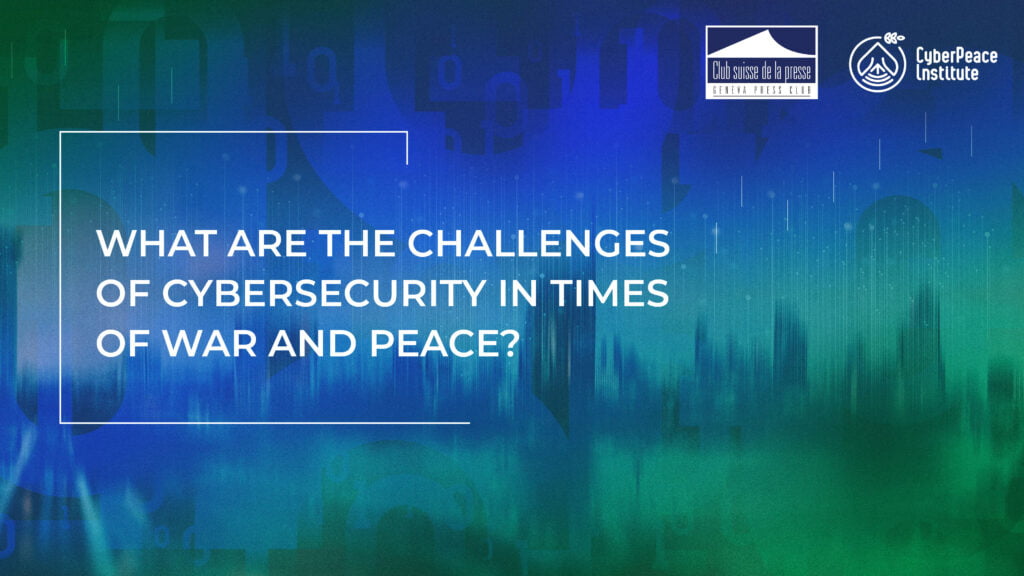 ‘Shields up’: Top insights from cyber experts on the threats of 2022

War in Ukraine has focused attention on cyberattacks but the threat is broader than that. The CyberPeace Institute hosted an event in Geneva to discuss the situation.

Suggestions that Russia’s cyber effort against Ukraine has been trivial are a “dangerous misdiagnosis”, said Christian-Marc Lifländer, Head Cyber and Hybrid Policy Section, Emerging Security Challenges Division, NATO. He stated Ukraine had been subjected to cyber operations of “unprecedented” magnitude.

In his keynote speech, at the ‘What are the challenges of cybersecurity in times of peace and war?‘ event – co-hosted by the CyberPeace Institute and the Geneva Press Club – Mr Lifländer praised the role of the private sector in defending against cyberattacks and said that the war in Ukraine had brought a new level of public-private engagement. He added: “Defending our values and the rules-based international order is a collective effort. So too is building capacity and helping others to shore up their defences.”

Mr Lifländer’s comments were echoed in two panel discussions at the event. Nicole Perlroth, author of ‘This Is How They Tell Me the World Ends‘, an award-winning book about the cyber-weapons market, said that Ukraine is serving as a “test kitchen” for public-private collaborative cyber defence.

‘Ukraine is an opportunity to communicate values’

However, she warned that Ukrainian successes against Russia increased the risk of retaliatory cyberattacks. “With each passing day, with each Ukrainian win, the threat level goes up,” Ms Perlroth said. “I’d say: shields up.”

She said: “We could shut off Russia energy systems, attack nuclear power stations, but we could also instead use it in a more constructive way, such as opening up information that the Russian state doesn’t want open: showing information about Putin’s dealings, putting out information on radio and TV stations showing we’re choosing to use this capability in a way that empowers you and doesn’t harm you. That communication will take us a long way.”

The focus on Ukraine should not distract from other cyberattacks, panellists also argued. For example, Balthasar Staehelin, Special Envoy for Foresight and Techplomacy, International Committee of the Red Cross (ICRC) said the ICRC had been the victim of a cyberattack at the beginning of 2022 and the effects were still being felt.

He also warned of the reputation damage that can occur through cyber activities. The ICRC, Mr Staehelin said, had been subject to false accusations that negatively affected how people in conflict zones viewed the organization and undermined trust. This was dangerous because, he said, “the ICRC works on trust”.

Responsibility and accountability in cyberspace

Solving the problem of cybersecurity threats required a multi-pronged approach, panellists said, but there was broad agreement that states need to create an environment in which people could have trust. Solange Ghernaouti, Director, Swiss Cybersecurity Advisory & Research Group (SCARG), and Professor at Lausanne University, said citizens need to be able to assume cyberspace is safe and called for better regulation.

But Stéphane Duguin, Chief Executive Officer, CyberPeace Institute, said: “The first thing to realize is that there is a lot of regulation – both national and international – that impacts illegal activity. There are also norms of responsible behaviour.” Mr Duguin said that the problem is a lack of enforcement and that we can’t reasonably expect enforcement without a peer-reviewed measurement of the scale of cyber attacks. We need to understand what we are dealing with and then apply the regulations.

State action alone won’t be enough, argued Florian Schütz, Federal Cybersecurity Delegate, Switzerland. He said individuals have to carry some of the burden. He said: “we’re in a democracy, you have liberties, and you have responsibilities.”

Cooperation gives cause for optimism

One area that could be improved, said Mr Schütz, is the robustness of IT systems themselves. He said: “You wouldn’t walk over a bridge built like an IT system, because it breaks all the time. We need to get better engineering.”

The lack of agreement on a solution just emphasises the difficulty of the problem. Panellists pointed out that regulation would put an added burden on small and medium-sized enterprises, many of whom already struggle to afford all the cyber security tools that they need.

Meanwhile, though national and international laws exist and cover cyber crimes, the ease with which criminal gangs can operate from any jurisdiction complicates the process of bringing them to justice.

There is still a long way to go but the conflict in Ukraine may have shown that the path forward lies in greater cooperation. As Mr Lifländer put it: “Cyberspace is an area of strategic competition and conflict between states, and it can only be defended and secured in a collaborative spirit.”